THE DETERMINATION OF OBVIOUS MISTAKES IN PATENT APPLICATION

HONG Liang v. Patent Reexamination Board -The Determination of Obvious Mistakes in Patent Application (Administrative Judgment (2011) Xing Ti Zi No.13 by the Supreme People’s Court on May 11, 2012)

In patent invalidation procedure, if the technical solution defined by a claim fails to be clearly described in the detailed description, the claim would be invalidated because the claim fails to be supported by the description. In practice, particularly, with respect to patent application for utility model, which does not experience substantive examination, sometimes typing mistakes made when drafting claims is difficult be discovered and corrected. In some instances, although the patentee argues that these typing mistakes can be correctly understood by a person skilled in the art because they are obviously, the arguments usually would not be accepted by the Patent Reexamination Board without support of sufficient evidence. This eventually leads to invalidation of several valuable patents. The judge held in this case that, if, by looking into the nature and degree of the typing mistakes, the person skilled in the art can naturally identify the typing mistakes and appreciate the corrected meaning of the typing mistakes, the typing mistakes shall be interpreted in a corrected manner. Consequently, negative effect of the typing mistakes on validity of valuable patents can be reduced, especially in the current circumstance where there exists no post-grant correction procedure for correcting typos and other clerk errors.

The patentee, HONG Liang, owns a utility model patent No.ZL200720128801.1 titled “Precise Rotating Compensator.” The patent relates to a rotating compensator, which absorbs the axial thrust and displacement through the relative rotation of an internal pipe and an external casing of the compensator. Claim 1 is reproduced as follows: 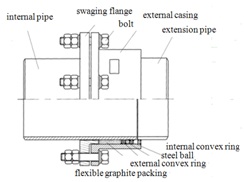 The Patent Reexamination Board (hereinafter, the “PRB”) made a decision to invalid the patent upon a request filed before the PRB for invalidation of the patent. The PRB held that, the feature “the other end of the external casing is connected with the extension pipe, a clearance is left between the components” in claim 1 is inconsistent with the corresponding content described in the detailed description, i.e., “the straight extension pipe 5 is external to the external casing, …, a clearance is left between the extension pipe 5 and the internal pipe 1.” Because there exists no clearance between “the components” defined in claim 1 as “the components” were interpreted into the external casing and the extension pipe, which are firmly connected together, (actually, there exists a clearance left between the extension pipe 5 and the internal pipe 1), the technical solution of claim 1 cannot be obtained directly or generalized from the disclosure of detailed description. Claim 1 is thus invalidated for lack of support of the detailed description under Article 26.4 of the Chinese Patent Law (2001).

After reviewing the case, both the court of first instance and second instance affirmed the decision of the PRB. Both courts held that claim 1 fails to be supported by the detailed description because the technical solution defined in claim 1cannot be undoubtedly obtained from the disclosure of the detailed description. Additionally, the courts did not accept the patentee’s argument that “the components” in claim 1 is a typo and can be correctly appreciated by the person skilled in the art.

The patentee initiated the retrial proceedings before the Supreme People’s Court, arguing that “the components” defined in claim 1 is an obvious mistake that can be identified and correctly understood by the person skilled in the art after comprehending the detailed description.

The main question presented to the Supreme People’s Court is that whether claim 1 fails to be supported by the detailed description because of the typing mistake in claim 1.

The judge held that, Article 26.4 of the Chinese Patent Law (2001) was enacted to ensure that the scope of protection of a claim should match the scope of disclosure of detailed description, wherein the protection scope shall not be broadened as exceeding the original disclosure of the detailed description, and shall not be narrowed as being limited to specific embodiments of the disclosed invention.

The judge pointed out that, in practice, the typing mistakes may be left in claims when drafting patent application documents. The typing mistakes can be classified into obvious mistakes and non-obvious mistakes based on the nature and degree of the mistakes. Regarding obvious mistakes, the person skilled in the art can identify these mistakes upon reading the claims, and understand relevant context and the whole description in a corrected manner correspondingly. Further, the person skilled in the art would not rigidly apply the identified obvious mistakes when practicing the technical solution defined in claim. As a result, where the person skilled in the art can understand correctly the intended meaning to be conveyed by the context of a claim in which there exists obvious typing mistake, it is improper to invalidate the whole claim under Article 26.4 of the Chinese Patent Law (2001), because this would result in imbalance between the protection conferred to the patentee and the contribution that the invention made over the prior arts.

Finally, the Supreme People’s Court reversed the court decisions of first and second instances, holding that claim 1 is valid under Article 26.4 of the Chinese Patent Law (2001), because the technical solution of claim 1 can be obtained from the disclosure of the detailed description.

Drafting patent application documents is challenging. Sometimes people may make errors when drafting application documents because of subjective reasons like immature drafting skills, and objective reasons like restriction of language itself for describing the technical feature. If the mistakes were discovered in examination procedure, they can be properly corrected. But, if the mistakes were left in the issued patent documents, they are quite harmful to the validity of the patent due to the limited manner under current Chinese legal framework for amending patent documents after granting of the patent right.

Other than China, many countries and regions provide sufficient remedies for correcting mistakes found in the granted patent documents, to balance between the protection granted to the patentee and the public’s interest.

In contrast, the granted Chinese patent documents can hardly be amended under current legal framework. Only the claims can be amended for both invention patent and utility model patent through invalidation procedure. Because the claims can only be amended in the manner of deletion of a claim, combination of claims and deletion of a technical solution, most of the mistakes cannot actually be amended through the invalidation procedure. In particular, because preliminary examination is applied to utility model in China, the patentee cannot amend the application documents in the preliminary examination period, making the amount of utility model patents having drafting mistakes substantively exceed the amount of invention patents. In the earlier examining procedure, besides the three manners of amendment in invalidation procedure, the PRB and the People’s Court usually allow the patentee to interpret the meaning of obvious typos only, so almost all of the other mistakes cause the patent to be invalided or partial invalided due to ambiguity or being inconsistent with the description.

How can a person determine that a drafting mistake is obvious or not? A person may take into considerations the following two respects. First, the drafting mistake is obviously incorrect and inconsistent with the objective facts described in the detailed description. Second, a person skilled in the art can arrive only at the correct answer according to the general knowledge in the art, and the content of the patent documents on the basis of logical reasoning.

Although the outcome of the decision has a positive effect on the enforcement of patent right, especially utility model patent right in China, the applicant, especially foreign applicant should pay full attention to the drafting quality of utility model application documents. It is necessary to estimate the stability of the claims and correspondingly limit the scope of claims, and to avoid subjecting the challenge of validity due to the drafting mistake. On the other hand, the drafting mistakes are likely to present in the utility model patent documents filed by foreign applicants because of language translation, literal expression, etc. When dealing with mistakes which may affect the validity of patent, a person can try to find the correct meaning of the mistakes from the patent documents on the basis of logical analysis.

Author Profile: Mr. Wu is a patent attorney in our mechanical division. He has work experiences in industry, Examination Department of SIPO, Patent Reexamination Board of SIPO, and also the Intellectual Property Division of the Supreme People‘s Court.