AN INVENTION-CREATION SHOULD BE EVALUATED AS AN ORGANIC WHOLE

Zhongquan CAO v. the Patent Reexamination Board – An Invention-creation Should be Evaluated as an Organic Whole (Administrative Judgment (2012) Xing Ti Zi No.7 by the Supreme People’s Court on May 3,2012)

In this case, a utility model patent No. ZL 200520014575.5 titled “An Oil-preserving Apparatus for a Bevel Gearset in a Sharpening Mechanism of a Cutting Machine” (“the involved patent” hereinafter) has the following four claims:

“1．An oil-preserving apparatus for a bevel gearset in a sharpening mechanism of a cutting machine, characterized in that an oil blocking wall (4) is arranged around a bevel gear position (2) and an intermediate gear position (3).

2．The oil-preserving apparatus of Claim 1，characterized in that the wall (4) is provided with a gap that enables the intermediate gear inside the wall to engage with a transmitting gear outside the wall.

3．The oil-preserving apparatus of Claim 2，characterized in that the wall (4) is integrated with a bevel gear box (8) or a sharpening grinder box(1).

4．The oil-preserving apparatus of Claim 1，characterized in that an arc cover plate (7) is provided on a transmitting gear (5) outside the wall (6).”

According to the description and claims of the patent, the patent is directed toward the problem of oil-preserving lubrication of the gear set in the cutting machine. To solve the problem, an oil blocking wall is arranged around the bevel gear position and the intermediate gear position to preserve the splashing lube around the bevel gear. Furthermore, an arc cover plate is provided on the position of the transmitting gear outside the wall, to prevent the lube inside the wall from being thrown out. 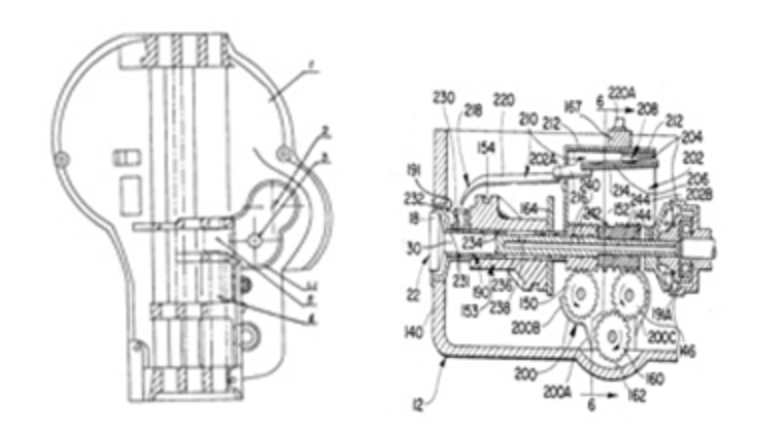 In the invalidation procedure, the patentee of the involved patent amended the claims by incorporating claim 2 into claim 1 to form a new independent claim 1. The panel adopted the standard three-step method, and held that the differences between the new claim 1 and the solution of attachment 5-1 lie in that: (1) the involved patent is aimed at a sharpening mechanism of a cutting machine, while the application environment of attachment 5-1 is a winding machine; and (2) in the involved patent the intermediate gear is engaged with an external transmitting gear, while in the attachment 5-1 gear 146 is coupled with a drive screw. Then, the panel further alleged that the above differences are all common sense in the art, and thus the new independent claim 1 does not possess inventiveness. In the examination opinions with respect to claim 3 (the original claim 4), the panel held that the aprons 206 are coupled with the straight forward portion 200A, the cylindrical section 200B and the rearward quadrant 200C of the shield 200, and the structure formed by this coupling functions to keep the lubricant around the gears. Therefore, the panel held that the aprons 206 in the attachment 5-1 are technically equivalent to the arc cover plate in claim 3.

In the subsequent procedures of administrative litigation, the courts of the first instance and second instance adopted the opinions set forth by the panel of the PRB.

In the retrial request, the petitioner (the patentee) submitted arguments that the feature in claim 1 of the involved patent, i.e., “an oil blocking wall (4) is arranged around a bevel gear position (2) and an intermediate gear position (3),” functions to keep the lubricant around the bevel gear set, so as to prevent the fabric for cut from being polluted. While in the attachment 5-1 there is a shield 200 that opens up and down, so as to spray the lubricant from the sump at the bottom to the outside of the shield 200, that is, this arrangement has an effect of “transportation”, rather than keeping the lubricant inside the shield 200. Moreover, the additional technical feature of the amended claim 3, i.e., “an arc cover plate (7) is provided on a transmitting gear (5) outside the wall (6),” functions to directly keep the lubricant around the transmitting gear. The aprons 206 in the attachment 5-1 function to receive the lubricant sprayed from bottom to top and to transport the lubricant to other components that require lubrication, that is, this arrangement has an effect of “reception.”

In addition, in the substantive examination procedure, the following situations are often encountered: the examiner splits a claim as a whole into several isolated “technical features” and evaluate each of these features separately, and then seeks to locate the corresponding description for each feature in the references or simply asserts one or more features belong to common sense in the art, regardless of the overall conception of the technical solution.

In case of overall consideration, a technical solution should be evaluated in a unit of feature. That is, two extreme cases should be avoided: one is to evaluate the technical conception as a whole, and the other is to split a complete claim into several fragmented parts to evaluate the respective part separately. To accomplish this, the followings should be paid attention to: the relationship between the claims and the description; the selection of the most pertinent prior art; and the division of features.

The association between the claims and the description, especially the effect of the description on explanation of the claims, has been discussed substantially before. Here, one should be emphasized is that, due to limitations of the language expressions, when a claim is considered as a whole, the technical solution claimed by that claim should be necessarily interpreted in conjunction with the description. This means one or more terms used in the claims should be interpreted in connection with the contexts in which one or more terms are placed. For example, the terms of “oil-preserving apparatus” and “oil blocking wall” in the present case. The intention to define clearly the protection scope by a claim itself is good, but in the practice the description cannot be ignored and must be memorized, especially in the substantive examination procedure.

Regarding the selection of the most pertinent prior art, an overall invention concept should be considered, based on the author’s understanding. If an overall concept of a prior art is pertinent, then naturally the number of related features being disclosed by the prior art is large. Furthermore, most of the present inventions belong to “improved-type” invention, and usually there will exist prior arts that have the pertinent technical conception. In the current examination practice, it is often the case that the most pertinent prior art for an invention only has the similar technical field, but discloses few of the technical features in the claim to be evaluated, and sometimes even only discloses the contents in the preceding portion. And the examiner would regard most of the features in the claim as distinguishing technical features and then allege that such distinguishing technical features have been disclosed or belong to common sense in the art; however, it is hard to say that this method of evaluation is reasonable.

One of the most common problems in the division of technical features is that the features in one claim are split into several fragmented parts and the respective parts are evaluated separately. Among many precedents, one of the problems is that a feature is punctuated inappropriately and then being held that the punctuated portion is not clear; a further problem arises when the contexts in a claim are not taken into consideration and being held in an isolated way that a certain feature is not supported by the description; even further problem arises where a claim is split into several isolated parts and the similar content for each part is searched in the prior arts respectively, and sometimes a part of them is regarded as common sense in the art if the similar content cannot be found. All of the above cases do not comply with the requirements that an invention-creation should be considered as a whole.

In practice, when the claims are drafted, it is necessary that the claims should reflect the substance of the technical solution in a clear and complete way, and the technical features embodying the invention point should be highlighted. Furthermore, the embodiments should be described clearly based on the description and the accompanied drawings. Especially, structural features should be clearly indicated in the drawings and should be described in conjunction with the drawings in a “look-and-say” way. Regarding this case, the substance of the technical solution of the present invention is not obviously reflected in the claims, and the descriptions in the detailed description are not sufficiently clear either. Otherwise, a different result might be obtained in the initial invalidation procedure. In addition, what should be emphasized is that when an attorney encounters with the examiner’s opinions that ignore the overall conception of the technical solution, he/she should have the courage to insist his/her arguments so as to obtain a reasonable result by an appropriate communication with the examiner.

Author Profile: Mr. Lin is a manager of our electrical division, and is a PRC attorney-at-law.