Boehringer Ingelheim Pharma GmbH & Co.KG v. the Patent Reexamination Board – How to Judge Inventiveness of a Crystalline Compound (Administrative Ruling (2012) Xing Zhi Zi No. 86 by the Supreme People’s Court on November 27, 2012)

With reference to inventive step of compound claims, it is stipulated in the Guidelines for Patent Examination that for a compound NOT similar in structure to a known compound, it will be regarded as inventive when it has a certain use or effect where a compound that IS similar in structure to a known compound, it might be regarded as inventive only if it has an unexpected use or effect. As can be seen, it is important to judge whether a compound is structurally similar to a known compound. This case clarifies that in the determination of inventiveness of a crystalline compound, the wording “structurally similar compounds” specifically refers to compounds having the same central part or basic ring, and has nothing to do with comparison between microcrystalline structures. The microcrystalline structure difference shall be considered only if it brings unexpected technical effect.

The petitioner Boehringer Ingelheim Pharma GmbH & Co.KG (hereinafter referred as “BIPG”) challenged the validation of the patent No. ZL 01817143.5 titled “Crystalline monohydrate, method for producing the same and the use thereof in the production of a medicament” (hereinafter referred as “The challenged patent”) for lacking an inventive step in view of Evidence 5a and Evidence 1. Evidence 5a discloses Tiotropium Bromide X-hydrate. Evidence 1 discloses Tiotropium Bromide crystals.

In the challenged patent, claim 1 seeks protection for “Crystalline Tritropium Bromide Monohydrate of Formula I 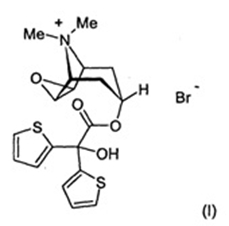 characterized by a single monoclinic cell having the following dimensions: a = 18.0774

To defend against the petitioner, the Patentee provided Counter-evidence 1, the Observation as submitted in response to the first office Action, to prove the unexpected technical effect that “after micronizing, the crystalline Tiotropium Bromide monohydrate of claim 1 produces substantially stable sub-particles under pressure.”

The first and the second instance courts upheld the PRB’s view as mentioned above.

The Patentee submitted a request to the Supreme People’s Court for retrial, indicating that (1) crystalline Tiotropium Bromide monohydrate of claim 1, Tiotropium Bromide X-hydrate of Evidence 5a, and Tiotropium Bromide crystal of Evidence 1 are not “structurally similar compounds” mentioned in the Guidelines for Patent Examination; and (2) the Counter-evidence has proved an unexpected effect, i.e. particle size of the micronized sub-particles remained unchanged under pressure.

Based on the above affirmation, the crystalline Tiotropium Bromide monohydrate of claim 1 are similar in structure with the prior art chemical products, and there is no description showing that the crystalline monohydrate as claimed produces an unexpected technical effect over the prior art. Thus, the Supreme People’s Court rejected the patentee’s request for retrial.

In the field of pharmaceutical chemistry, developments of new pharmaceutical active compounds is always expensive. In contrast, screening new crystalline form of known chemical products is much cost-friendly. Meanwhile, patents of new crystal form do a good job in extending market exclusivity period of patent medicines. Therefore, in order to extend the patent protection period in a different way, patentee of a compound patent often desires to get patent for new crystal form of the known compound.

However, compared with a known pharmaceutically active compound, these crystalline forms generally only differ in their microscopic crystal forms, without significant change in their basic chemical composition. Considering that the crystalline form of a compound would necessarily have “a certain use and effect,” if such a crystalline compound was considered as having different structure with the known compound, it should be granted a patent right. This criterion will inevitably result in a flood of crystalline compound patents, thereby discourage people’s enthusiasm to invent. This is contrary to the legislative intent of the Chinese patent law “to encourage inventions”.

Back to the present case, crystalline compound is a compound wherein molecules are spatially arranged in a periodic and repeated way according to certain rules. Therefore, crystal form of a compound necessarily has better thermal stability when compared with its amorphous form. Claim 1 relates to crystalline Tiotropium Bromide monohydrate wherein the crystalline hydrate molecule are arranged periodically and interact with each other with certain forces. Compared with the crystalline hydrate, amorphous hydrate wherein water molecules are arranged irregularly are easier to lose their water. That is to say, the technical effect that “the crystalline monohydrate does not start to dehydrate until the temperature rises to 50℃and thus it may be stored for a long-term at room temperature or under even more severe conditions” is foreseeable. Therefore, the above technical effect cannot be considered as an “unexpected” technical effect.

The challenged patent may be maintained valid, if (1) the patentee had documented the effects that “after micronizing, the crystalline Tiotropium Bromide monohydrate produce substantially stable sub-particles under pressure”; and (2) relevant experimental data had been provided to support the above technical effect. As far as the writer’s knowledge, there is no necessary correlation between the stability of particle size and the crystal structure of a compound. That is to say, the technical effect of “stable particle size” seems to be unpredictable and cannot be reasonably inferred, and thus can be considered as an unexpected technical effect. Thus, the relevance between technical effects and structural features is an important element to be considered. Therefore, it would be necessary to deeply study the structure-effect relationships.

In the writer’s opinion, it is necessary to include and draft several technical effects produced by an invention in a clear, justified, and progressive manner in the description. One or more of these beneficial technical effects might be deemed to be unexpected technical effects in further examination or litigation proceedings when facing inventiveness challenges, so that the applicant will occupy a favorable position.

First of all, description on an unexpected technical effect should be clear and justified. The description should clearly illustrate which particular technical effects are beneficial over the prior art. For this case, “the activity stability of the starting materials under various environmental conditions, the stability during production of the pharmaceutical formulation, and the stability of the final medicament composition” are only generally and ambiguously mentioned in the last paragraph on page 1. This vague and general description is meaningless to prove an unexpected technical effect. In the field of pharmaceutical chemistry, necessary experiment data is usually pre-requisite to verify beneficial effects.

Second, it is better to draft beneficial technical effects in a progressive (pyramidal) manner so as to build a “pool” for unexpected technical effect. The drafter should not only understand the invention extensively as a whole, but also draft related technologies in a progressive way, so as to set up multiple “layers” of protection. For example, the patentee of the challenged patent unerringly further limits “stability during production of the pharmaceutical formulation” to “stability of amorphous configuration and crystal lattice” in paragraph 5, page 2 of the description. Unfortunately, the stability of amorphous configuration and crystal lattice were not considered, since the prior art Tritropium Brominate has better crystalline configuration and lattice stability.

In summary, in order to obtain a more stable patent, the patentee should assess all risks that may occur in the future, set forth in the specification a variety of beneficial technical effects, and provide strong support to such effects via adequate experimental data, so as to better safeguard the patent application/right.

Author Profile: Ms. Zhao is a patent attorney in our biological & chemical division, and is a China Supreme Court appointed attorney for patent litigation.