HOW INNOVATIVE IS CHINA? VALUING PATENTS

China has overtaken America again. Its patent office received more applications than any other country’s in 2011. (The numbers were released in December.) But look closer, and the picture is murkier.

In America and Europe, roughly half of patent applications are lodged by foreigners. This used to be true inChina, but in the past few years filings by locals have surged to three-quarters of the total (see chart 1). Is this because China has suddenly become more innovative? Or is it because government incentives have prompted people to file lots of iffy patent applications, which the local patent office has a tendency to approve? 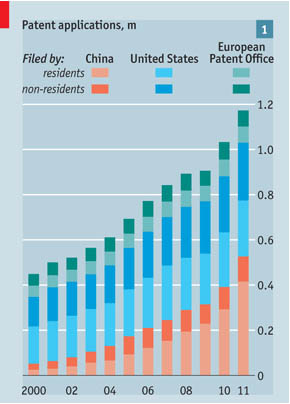 There is no reliable way to measure a patent’s value. But one can use a rough-and-ready yardstick: in how many places did the inventors seek a patent for the same technology? If it is a good idea, they will try to patent it in lots of places. If they just want to pocket a Chinese subsidy, they won’t bother.

Data from the UN’s World Intellectual Property Office suggest that some of the apparent spurt in Chinese innovation is illusory. Or at least, patents in Chinaare probably less valuable than those inAmericaorEurope. 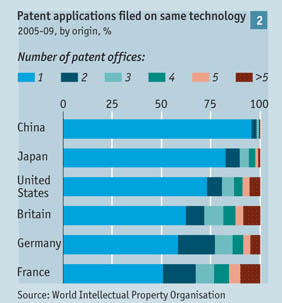 Hardly any Chinese inventors seek to patent their ideas abroad. Between 2005 and 2009 fewer than 5% did (see chart 2). InAmerica, the figure was 27%; inEurope, more than 40%. Geeks in the West should not relax, but it is not clear that their Chinese rivals have yet outstripped them.